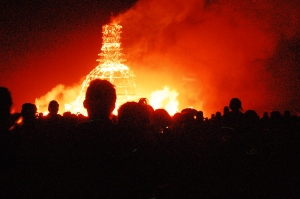 A friend of mine sent me an email late last night crying out for help. He was an assistant pastor in a small church I pastored years ago. Since that time, he has purposely taken on the task of pastoring small, wounded churches back to health. He is currently assisting a church in New York, and he is being faced with being thrown out of the church, because after apparently voicing some concerns about the actions of the church leadership, he is being branded as having a “Jezebel Spirit.”

Pentecostalism began in tents, backwoods, and in a stable on Azusa street in LA. It was chaotic and happy. It was comprised of common people. It was multiracial. It emphasized the availability of the gifts of the Spirit to all people: young and old, black and white, rich and poor.

75 years later, in the late 1980s, pastors were being herded into training meetings like cattle. We were being taught how to grow our churches, and lead them more like ranchers, and less like shepherds. Numbers and exponential growth were emphasized. Fruit of ministry was indicated by butts in the seats, buildings to house those butts, and charismatic leaders with notoriety in their holy little kingdoms. “Vision,” often just another word for humanly sanctified goals and self-aggrandizing dreams, was the torah scroll of leadership, and to question the vision of a church was to question God Himself. At least, that is how it eventually developed in the corporate leadership world of my Pentecostal denomination.

As we fast-forward 25 plus years from the Church Growth Movement, we find the echoes of its influence making the headlines of newspapers. We should have been warned by the early headlines of our Church Growth heroes. The Jim Bakkers, and the Jimmy Swaggerts rocked the secular news, but this was not a good thing. Ted Haggart later gave us another view beneath the bed sheets of this top-down charismatic leadership style.

Now, we are watching the implosion of Mars Hill Church in Seattle. The charismatic leadership with its strong uncompromising vision is collapsing under the scrutiny of the press, and of Christians who are fed up with heavy-handed leadership and abuse from pastoral authority claiming its divine right to lead. The Mars Hill story is remarkable for this reason: It is not simply immorality and scandal discovered and reported by the secular press, which is causing the downfall. The downfall is being created by Christians who are wising up to an abusive model of Christian leadership.

I do not believe for a moment that this marks the end of abusive leadership in Christianity, but I do believe that it marks the beginning of the end of the corporate American business model being commonly accepted as the best way to care for the people who follow Jesus without being challenged for abuses which occur. Perhaps we shall begin to see Paul’s ancient model of church as family become the new best model for Christianity in postmodernity. That would make me happy. This just may be the last gasp of top-down, unchallenged corporate leadership as a model of running this family we call “Christianity,” and the those who use superstitious and manipulative accusations like the “Jezebel Spirit” will begin have less and less influence with up and coming leaders.

Of course, by stating that this is the last gasp, I am also stating that I believe it will appear to get worse, before it gets better. More people will be hurt, and friends of mine will continue to call me as they experience the struggle by selfish leaders fighting to maintain their little kingdoms. It will never really end. Humanity is too selfish, and too easily deluded for that to occur, but I do believe that more Christians are growing wise to the lies of a broken heavy-handed leadership model.