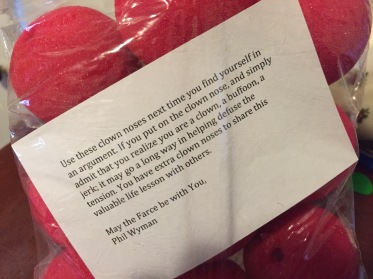 May the Farce be with you.

We watched Star Wars: The Force Awakens. We were surprised. We were laughing. Some of us were crying. Some of the audience around us clapped and cheered when familiar faces and gadgets appeared. Star Wars is an institution of important childhood memories for many people today. Somehow the cheesy, the dramatic, the adventurous all crashed together and captured our imaginations, and gave us some hope that life could be different, and bad guys could be conquered.

How did this cast of clowns – both human and beeping, smoking machines – become so engrained into our world of thought and emotion? Was it the cutting edge of film technology that Star Wars movies have used in each generation? Is it a character cast of believably unbelievable characters who have given us life lessons we can take home with us in epic story lines? Is it the tense combination of pathos and (often) cheesy humor?

To all of these points, I would say, “Yes.” And perhaps underlying each of these issues, is the element of surprise: Surprise that it looked so dramatic, and even hyper-real. Surprise that we identified with characters – human, alien, and machine. The surprise that we found when the pathos captured us in the midst of the adventure, or humor caught us off guard, and insinuated things deeper than the momentary laugh of the punch line.

This is the power of Carnival. It is something that turns our world upside-down. Perhaps Star Wars is evidence that we do not have enough clowns in our lives. Perhaps it is time that more of us donned the powerfully symbolic activity of the clown, and brought the element of surprise with us in our daily encounters with others.

I am beginning to package clown noses right now. Some of the people who helped support the publishing of Burning Religion will be receiving a pack of clown noses soon. This is to remind us all that it is no use playing the clown. If we could just be ourselves, we would already carry the surprising power of turning the world upside-down with us everywhere we go. Admit it, people think that you are a clown anyway – and you think the same of them. Admitting it is part of the great surprise of life. These clown noses are to be worn once an argument begins: put it on and simply admit that the other person is correct about the fact that you are a clown. It just might help defuse the moment of tension and allow real dialogue to happen.

May the Farce be with you.

And here in this Christmas season, we focus on another clown: Santa Claus. The American version of Saint Nicholas is truly a clown, and even many people who hate or fear clowns have suspended our critical, or fearful responses for this chortling roly-poly character of fantasy. Along with the movies, which have captured us the most throughout our lives, this holiday, which has extended itself way beyond its 24 hour period captures us even more. It embodies gift-giving, and joy, and surprise in the same way a clown breaks the stage line in the circus. It should not be a surprise that the commemoration of the birth of the Son of God is celebrated with a jolly clown. The story of Jesus is already a surprise and a joyous invasion from God, and the host of characters in this story are often clowns themselves. And, that includes God, Who broke the stage line and surprised us with His love.

May the Farce of God, which brings surprise and blessing awaken in you this season.

The surprise of the season can be extended with the fantasy, life lessons and the theoretical work on the power of Carnival found in Burning Religion. Consider blowing somebody’s mind today with the gift of Burning Religion.