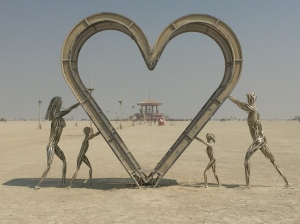 Today, I was reading an article from the BBC about the recent letter from Burning Man CEO Marian Goodell. There is nothing new in this BBC article (except the letter from Marian), and in fact, the information is a number of years old. We were already talking about this stuff at my first Burning Man in 2010.

I did not attend Burning Man last year, although I did attend two regional Burns: Unbroken Spring north of Houston, TX, and Burning Nest in Devon, UK. But, I wanted to respond to this post, because it is not only old news that “plug and play camps” are causing havoc with the Burning Man ethics, but it did not identify another economic dynamic putting stress upon the cultural boundaries of the 10 principles of the event. 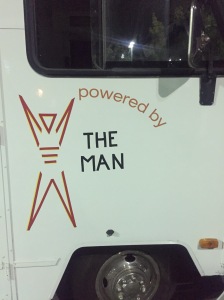 Two years ago, our camp (Ludus Symposium – run by the Most Awesome Brian and Amber Barger) experienced the other end of the economic stress at Burning Man. We had a guy who joined our camp, and brought in a wrecked trailer full of broken bikes and dilapidated yurts he was going to rent. He spent his time sucking hippie gas (nitrous oxide) from whippet canisters, making messes with his trash, and trying to sell or rent his various trashy items.

Part way through the week, the camp across from us, Hair of the Dog, which was a free and open bar (like all things at Burning Man, where there is supposed to be no exchange of money) was broken into, and all the alcohol was stolen. Thievery like this has traditionally been unknown at Burning Man, because everyone is giving everything away. The occasional bike may disappear, but for the most part stealing didn’t happen often. And I say that as a relative newcomer to the event, so this development of a culture of theft and distrust was new even to me.

I spend time on the road with nomads – rubber tramps, traveling hippies, and Dirty Kids, and am not unexperienced with the pitfalls of the road, but on the other hand, to some degree these nomads are my people. What I am going to say next is not a slam on these nomadic people, it is just a simple observation, of which little has been said in respect to the changing culture of Burning Man.

In 2017, the last time I was there, the Dirty Kids (traveling nomads), who typically can’t afford or would even be interested in Burning Man, where there, but this was not your average Dirty Kid. This particular guy from our camp was someone who could raise the money for tickets to the Burn, and was looking to make a buck off of the event. I have seen this guy who stayed with us in other burns since, and he is doing the same thing across the US. He is not alone in this behavior. Others are doing it as well.

The economic pressure on Burning Man events is coming from the top and the bottom. Some people with lots of money are coming to the event as lookie loos and are not participants in the 10 principles. They are simply selfish consumers. They ruin it for everyone else. On the other end of the economic spectrum, some people are attending Burning Man with criminal intent. They will not only bend principles like gifting and decommodification, but they will bring theft and perhaps violence to the event.

It remains to be seen which end of the economic spectrum will have the greatest negative effect upon the event, but it is my guess that the upper end of the money trail, with the plug and play camps like White Ocean and Humano the Tribe, will be easier to control than the economic pressure coming from below. After all, even Burning Man can’t afford to treat those at the bottom poorly without losing serious cred.

Watch the future of Burning Man. It is going to be an interesting ride in experimental communities. I believe this is also a reason for us to be in such places. We need to be ahead of the cultural movements of our time – not behind them, which is unfortunately where much of Christianity rides at the moment.

Where to buy Burning Religion

You can reach me via email at
pastorphil (at) salemgathering.com